Skip to Main Content
It looks like you're using Internet Explorer 11 or older. This website works best with modern browsers such as the latest versions of Chrome, Firefox, Safari, and Edge. If you continue with this browser, you may see unexpected results.

Information about resources available in the MLIC

Cases are decided by courts and are published reported chronologically in sets of books we call Reporters.

Reporter sets are numbered by volume and series. When a Reporter series reaches a high enough number of volumes a new series starts over at volume one.

Note - Reporters do not have pocket parts. They are not updated. Think about it- once a case has been published, the parties to that case may or may not go on and appeal - but the opinion written by the judge in that case stands and isn't going to change.

Almost all states have their own reporter set which only includes cases from that jurisdiction, and also federal cases which arose in that jurisdiction.  Check Appendix 1 in your A.L.W.D. to find the name of the Reporter for any state in which you're interested.

One hundred or so years ago, the West publishing company divided the country up into several regions and began issuing Regional Reporters, each of which contains the cases from several states.  Unlike state reporters, there are no federal cases in Regional Reporters.  Here is a map of the regions: 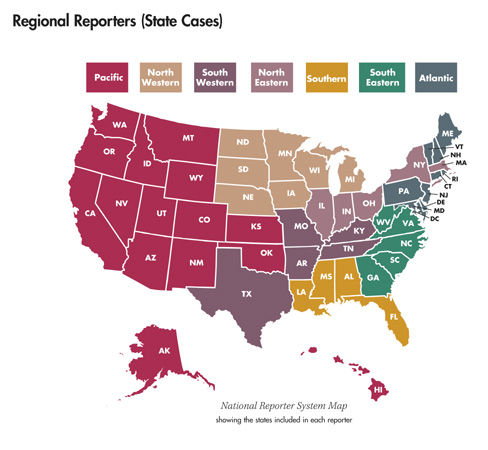 When you're researching an issue the controlling law in your jurisdiction might have been decided in a case eighty years ago.  How do you find out about an eighty year old case buried deep in the Reporters?  Digests.

Digests are a type of finding tool which allows you to quickly discover relevant cases, no matter when the case was decided.

At the beginning of most cases, before the opinion of the case itself are "headnotes".  These are paragraphs (or short summaries of paragraphs) copied and pasted from the opinion.  In the judgment of an editor at West (or in some cases the court itself) these single paragraphs represent salient points from the case- that is, the points of law that this case decided. Some cases have only one headnote, some very complicated cases can have more than twenty.

(An important point to remember - Headnotes are not the law itself, and are not a substitute for actually reading the case itself!)

West has created a giant outline of all case law in the United States.  This outline is divided into 450ish major topics.  Each topic has its own outline, and each part of the outline is given a number, which is called a Keynumber.

Please never, ever, ever say, "keynote".

Headnotes from cases are assigned Topics and Keynumbers by editors at West.

If you were to grab a pair of scissors and go through a Reporter and cut out only the headnotes, and arrange them into alphabetical order (Contracts 116 comes before Penalties 15, etc.) you'd be making a Digest.  A Digest is nothing more than a set of books which contains all the headnotes from the Reporter it covers, arranged into order by Topic.

There is usually, but not always, an associated Digest for every West Reporter.  Exceptions are:

So, a West editor reads a case and pulls out one paragraph or sentence from the case and decides, "This is the heart of what was decided", and then after careful consideration (and using years of experience) the editor decides to assign "Contracts, keynumber 116" to this particular headnote.

This headnote, labeled Contracts k116 will appear at the beginning of the case before the opinion- and this headnote will also appear in the proper state digest and regional digest under Contracts, keynumber 116.

As if all this weren't complicated enough- Keynumbers can change on you.

Think about this situation:  In 1945 (or so, I'm just making this up for an example) a West editor decided it was time to create a new Topic called Telecommunications.  After thinking about it and researching the issue he designed an outline with 10 keynumbers.

Ten years later he needed more room so he redesigned it to have 100 keynumbers.

Sixty-six years later, and Telecommunications is a huge Topic and contains hundreds of Keynumbers.

The law is constantly changing, and so is West's Key Number system.  They try to plan ahead and make the Topic Outlines flexible to contain new cases, but often new issues arise which couldn't have been thought of- or old Keynumbers turn out to need subsections and sub-subsections.

In print this presents a problem- Reporter volumes with "Telecommunications keynumber 5" stay on the shelves, unchanged from when they were first published in 1946.

In the Digest, after the Topic Outline and before the Keynumbers themselves, you will see a Translation Table (if your topic needs one).  This table converts old keynumbers into new keynumbers.  So, your old case in the Reporter uses Telecommunications keynumber 5 - you take that keynumber to the translation table and discover it is now 1005.5, and then go to 1005.5 to see more cases on that issue.

(When the West editors redo topic outlines they don't re-use old Topic numbers, otherwise it would get really confusing)

States Reporters and Regional Reporters have their own Digests (with the exceptions noted above), but there are also several topical Digests.  Click the image below to see the full chart: 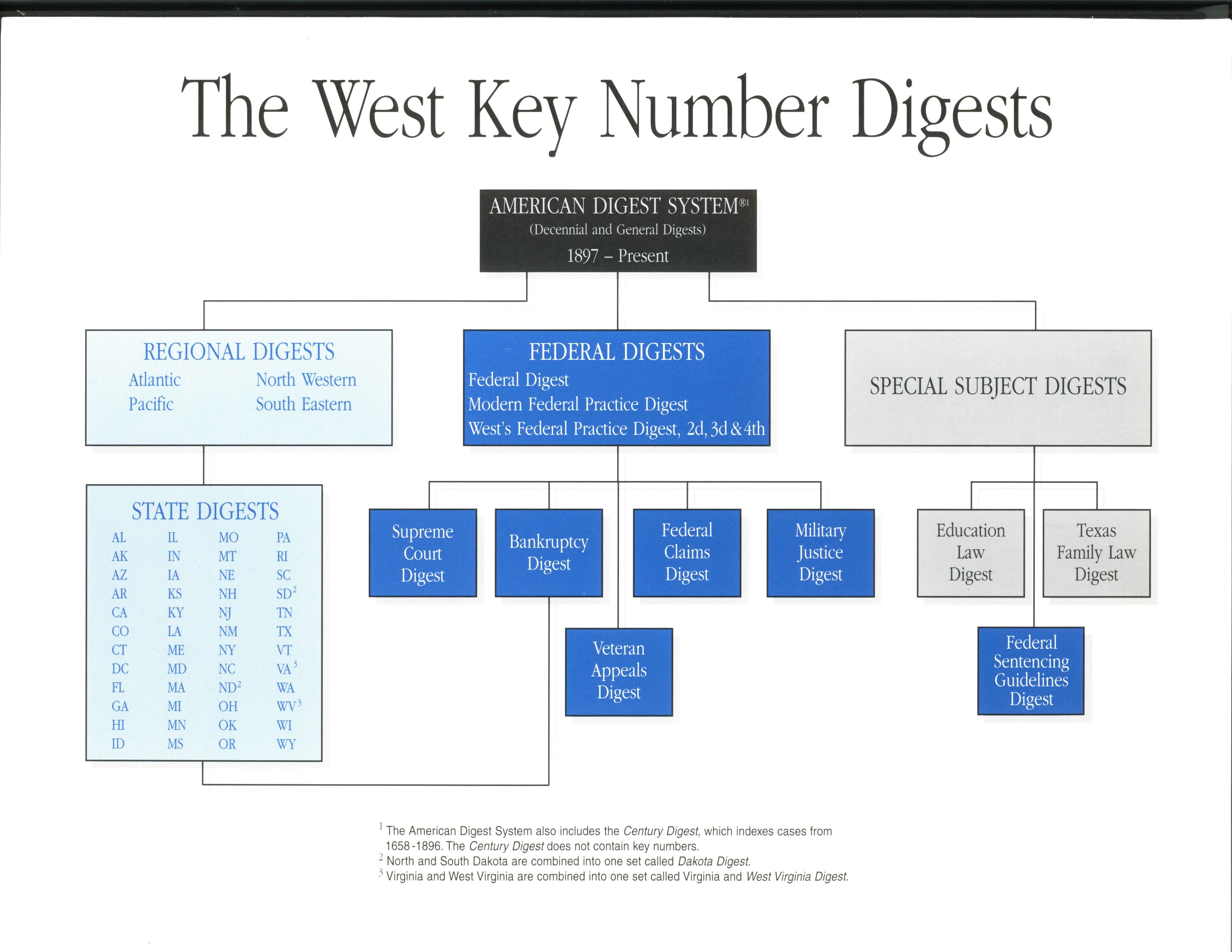 Digests are a finding tool to get you to relevant cases.  There are generally five different ways of using a Digest to get information, and which one you use depends on what you already know. You generally don't have to use more than one:

1. Known Case Approach - This is the no-brainer.  Somehow you've found a case and are reading it. You see that "Criminal Law k45.30" has been assigned to a headnote in this case.  You go to the Digests and pull out the volume which contains Criminal Law and flip pages till you find 45.30, then look for other similar cases.

3. Topic Analysis - At the beginning of every Topic entry in the Digest is a sort of table of contents for that Topic called the Topic Analysis (or Topic Outline).  The beginning of the Topic Outline has a short section titled "Subjects Included" and "Subjects Excluded".  For example, if you were looking up information on deer poaching and went to the Topic Animals, you'd immediately see in the "Subjects Excluded" that you should stop looking in Animals and go to the Topic "Game".  Once you are satisfied that you're probably in the right Topic, you read through the outline looking for a keynumber you think will help you.

5. Table of Cases - Again at the end of the Digests, there are usually two or so volumes called the Table of Cases.  This is simply an alphabetical listing of every case in the Digest, arranged by both Plaintiff and Defendant, and includes the citation to the case and the Topics and Keynumbers of the Headnotes in that case.

Remember that cases are not updated themselves - the words the judge wrote in a case's opinion stands and isn't going to be changed.

But, Digests are collections of cases by topic.  When you talk about updating a Digest, what you mean is that you're trying to find if there are any newer cases in your jurisdiction which have discussed your issue, and there are always new cases being decided.

If you consult a Digest volume which contains "Criminal Law k45.30" which is two years old, you're obviously not going to know about any newer cases on that particular issue.

You know by now to always check the pocket part.  Only very new Digest volumes don't have a pocket part in the back.

At the end of a Digest set you'll usually find a paperback supplement.  This supplement updates the pocket parts in the individual volumes, and is good for the entire Digest.  That is, it starts with the "A" topics and ends with the "Z"'s.

Closing Table and Back to the Reporters

The Digests follow along behind the Reporters, always lagging a bit behind.  If you look in the front of any Digest volume you'll see something called a Closing Table, which tells you how current the Digest you're holding is.  For example, "This volume closes with cases reported in 45 P3rd 579".  This means that if there is a case on your issue which appears at 45 P3rd 580 you're not going to know about it from the Digest.

So, you have to go back to the Reporter itself, because the Digest has taken you as far as it can.  In this example, we know we're current through 45 P3rd 579.  From experience we know that "page 579" probably isn't the last page in volume 45 of the Pacific Reporter 3rd- the Reporter volumes can run up to a thousand pages sometimes.

So what do you do? Painstakingly read every case which appears after 45 P3rd 579?  Warning - we're up to volume 55 P3rd, so that's 10 volumes of cases you'd have to read through.

Luckily, every Reporter volume contains a 'mini-digest' in the back of the book which covers only that volume.  So you'd check the mini-digest in volume 45 to see if any cases on "Criminal Law 45.30" appear, then volume 46, 47. . .

Somewhere around volume 50 or so you'll discover that the hardback volumes stop and then you get into paperback "advance sheets" - these are slim reporters which only contain a few cases and are sent out as fast as possible, and will eventually be collected into hardback volumes.  You still have mini-digests in these volumes, but they appear in the front instead of the back.

Updating the Digest - Putting it all together

To update a Digest:

It might surprise you to know that "bad" cases aren't removed from the Reporter or the Digest.  They sit there, for all time, waiting to trip you up.

Finding out whether the case you're relying on is still "Good Law" is a separate step called Validation (or Shepardizing), and will be covered on its own page here and its own class later this semester.